When releasing a new album to the public it is customary to pair it with what's called a "press release" in order to prepare your intended audience for what to expect, hype up your new project and give an obligatory explanation of why it is something so new and important that they not only want, but need to engage in it, lest they miss out on something much bigger and more sacred than themselves, the artist or the contents of the project itself.

'Be Mindful of Bears' is my 4th full album released under the band "Chucky Waggs & the Company of Raggs". Some of these songs are ones we've been playing live for a while. Some are new ones I've been working on for this release. Some are ones no one's ever heard live and quite possibly never will. Some were recorded as fully fleshed out instrumental arrangements with lyrics that were painstakingly agonized over, re-written, scribbled out, rearranged and the chopped down to one or two lines only to be used for a different song altogether, where they were better suited. Some of these songs are essentially demo versions of stuff I wasn't sure what else to do with, but once recorded, felt as if they were as completed as they'd ever be.

Unlike the previous two CW&CO albums "Low-Road Ramble" and "Junkyard Charlie", which were written, arranged and recorded with complete consideration, restraint and intention prior to the recording process, to achieve a very specific tonal/lyrical idea from beginning to end, this collection has been written and recorded sporadically over the last few yrs. There was little to no concrete idea of how i would arrange each, little consideration of what tone would need to be struck from one song to the next or what would come of the lot once, or if, I could ever manage to reach the end.

The result is a hodgepodge of different styles, sounds, lyrical and arrangement quality, composition, tone, sonic qualityyy....blah, blah, blah! Point is: I'm not sure if this is a good album, an alright album with some good songs, a mostly bad album with a few strokes of good luck, or a pretty damn alright album, save the occasional feeling of randomness. It's not really for me to say anyway.

These songs have served me well throughout the process of commiting sporadic thought, word salad, stream of conciousness, and existential crisis turned cleaver idiom and narrative to paper; from paper to melody, melody to arrangement, arrangement to finished album. The end result of all that is an album I'm calling 'Be Mindful of Bears'. After a bit of good advice i once saw posted on a hand made sign while in the Smokey Mountains years ago. I have followed that advice ever since and have yet to me mauled by bears or have a picnic basket stolen(knock on wood), so I saw it as only fitting to pass that bit of good advice on to the public at large...or atleast the portion of the public who listens to off beat modern folk music variants.

The idea of throwing together a bunch of songs that werent intentionally meant to live alongside each other, or of which the feeling of one might counteract the intent of another is enough to keep a neurotic type, like myself up at night. However, the idea of sitting on them any longer, growing more unsure and recording even more than the 17 songs I already have piled up is enough to eventually convince myself to set these aside and start all over. Being as frugal as I am with time, money and energy, this is not an option for me...but like I said, this isn't about me.

It's about those of you who've been generous enough to enable and even validate this endeavor over the years, whether through attendance at live performances, attaboys, streams, downloads, purchasing of cd's, merch, stomping/singing along or a simple sentiment that you've enjoyed one of the songs. It's with that idea that I will keep putting out, not just what I think someone might want or need to hear, or what makes me feel important as a person who gets attention by writing and playing songs, but whatever it is I have to offer up, to whomever might wish to listen.

If you're still reading this unfocused rambling mess of a "press release", that means you might be the type whose interested in a 17 song long folk/country/blues/ragtime/jugband/stringband album of stories and ideas which may or may not entertain, stimulate or distract you for a time being. Whether or not that's the case, I appreciate your time.        -CW

Chucky Waggs & the company of raggs

A rambling story about climbing out of holes.

Chucky Waggs & the company of raggs LIVE at KINGFISH PUB

Chucky Waggs & the company of raggs LIVE at Chelsea's

Stars and Sauce festival at the Farm

CW&CO will be returning to the Smoke and Barrel in Fayetteville to play a bunch of songs, drink whiskey and stomp the night away. Come on out and join in if that's your kinda thing. 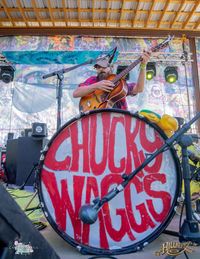 CANCELLED-Chucky Waggs & the company of raggs at Rose Music hall

Chucky Waggs & the company of raggs will be making our Columbia Missouri debut at Rose Music hall April 18th. We'll be stompin, hollerin, dancing, baltering, and partaking in general Tomfoolery!

Chucky Waggs & the company of raggs will be making our debut at the Crow Moon Festival, taking place this year at the Farm in Eureka Springs, AR. Too many good bands to list. See more details here: https://www.facebook.com/events/3668318363209086/